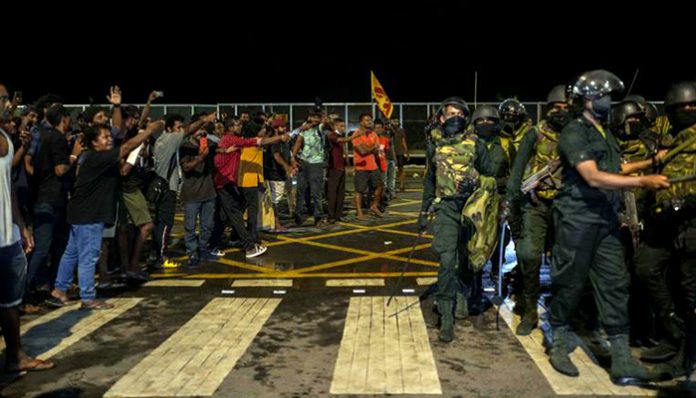 International concerns have been raised over the lack of human rights conditions prevalent in Sri Lanka after the new Executive President had unleashed a military crackdown.

At midnight on the 22nd of July, Sri Lanka military forces having been empowered by an Emergency Gazette released the day before “for the maintenance of public order” stepped into the Galle Face green in the capital, which had been occupied by protestors for more than 100 days. The protesters who were successful in forcing former president Gotabaya Rajapaksa to step down and flee the country were demanding the new president Ranil Wickremesinghe too goes home. On the night of the military crackdown which took place, violence uncertainty and allegations of assault upon journalists have also come into focus mainly through social media.

The US Ambassador Julie Chung, who in the morning hours of the 22nd spoke on Twitter voicing being ‘deeply concerned’ whilst ‘urging restraint by authorities and immediate access to medical attention for those injured’. The United Nations were ‘alarmed by the unnecessary use of force by security forces to break up a protest camp’ further condemning ‘reports of beatings, of protesters, journalists and lawyers.’ Ambassador Chung repeated her concern 12 hours later stating that ‘this is not the time to crack down on citizens’. The Ambassador also stressed, after having met the President, the need to ‘regain the trust of the people, restore stability and rebuild the economy’.

Similar sentiments were echoed by the United Nations Human Rights Council Core Group on Sri Lanka which stated it was ‘dismayed at the violence which took place in Galle Face last night’ whilst Amnesty International urged Sri Lankan authorities to ‘stand down immediately’. The violence itself amounted to the assault of at least seven journalists by the military according to the SAARC Journalist Forum, whilst the Free Media Movement of Sri Lanka in condemning the attacks stated that ‘full details of the attacks on journalists and the damage caused has not been reported so far’. Activists fear the number could be higher than what was originally counted. The British High Commissioner for Sri Lanka Sarah Hulton stating that she was very concerned about the recent activities delineating that ‘We have made clear the importance of the right to peaceful protest.’ Similarly, Dominik Furgler the Swiss Ambassador to Sri Lanka raised his ‘deep concern’ urging for ‘restraint and full access of medical services’.

Most international voices had stressed the importance of a ‘peaceful transition of power’ a week ago, however, the newly appointed Ranil Wickremesinghe having released an emergency gazette to transfer public security ordinance to the military had apparently gone down the route of enforcing crackdowns despite public outcry and international concern. The Sri Lankan military had arrested 9 protesters, of which 7 were brought before Fort Magistrates Court; the 9 were released on bail today. 2 of the 9 were being treated for injuries in Colombo National Hospital, said the police.