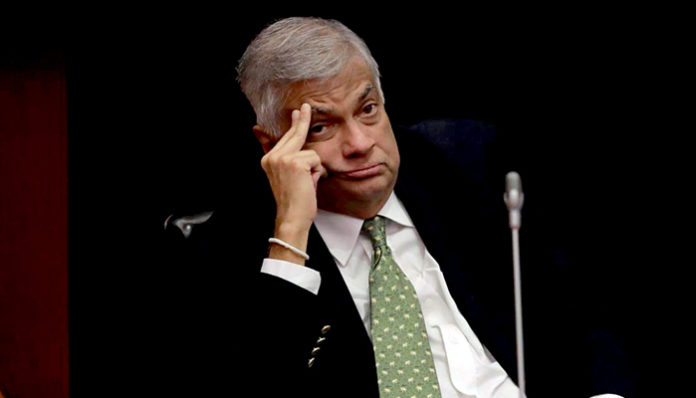 A collective of trade unions in Sri Lanka has submitted a proposal urging the acting President Ranil Wickremesinghe to step down, and form an interim government for six months followed by an election, in order to resolve the current crisis.

It is also their suggestion that the activists of the struggle that ousted Gotabhaya Rajapaksa, should also be given a representation in the future governance of the country.

The proposals released by the Trade Union Coordinating Center on July 17 at the Colombo Public Library Auditorium with the participation of representatives of trade unions and mass organizations, point out the measures that a future government should take immediately.

The trade unions have proposed that the cabinet of the six-month interim government should be limited to 15 members and from the president to every member of parliament all allowances should be slashed except for their monthly salary.

Reducing the prices of essential food items, addressing the shortage of fuel, gas, medicines and essential food items, providing fertilizers, insecticides and herbicides, industrial raw materials and equipment without shortage and removing the interest charged on loans given to self-employed, agriculture and fishing sectors and granting further six months to repay the loans are among the urgent measures suggested.

Their resolution has also proposed to abolish contracts aimed at the sale and lease of public property, repealing new legislation that cuts down labour rights, wages, pensions and lays off public employees, and make provisions for granting special leave on election days to allow private sector workers to vote, and to remove legal obstacles on increasing the wages of pensioners and plantation workers and providing other essential facilities.

A representation from “Gotagogama”

In order to get the contribution of the parties in the people’s struggle, the trade unions further propose to establish a citizen council with legal powers, with the participation of mass organizations including trade unions, students, farmers, fishermen and professionals.

In addition to this, it is proposed to establish a legal mechanism in which trade unions also be a part, to supervise all public and semi-state institutions, and a parliament-approved regulatory council consisting of registered trade union federations to regulate the amending of labour laws, wage and pension provisions, trust funds, etc., which directly affect the working class.

The Trade Union Coordinating Center, which proposes a speedy program to grant justice for those who lost their lives and suffered physical disabilities during the people’s struggle, calls for the release of all illegally arrested citizens.