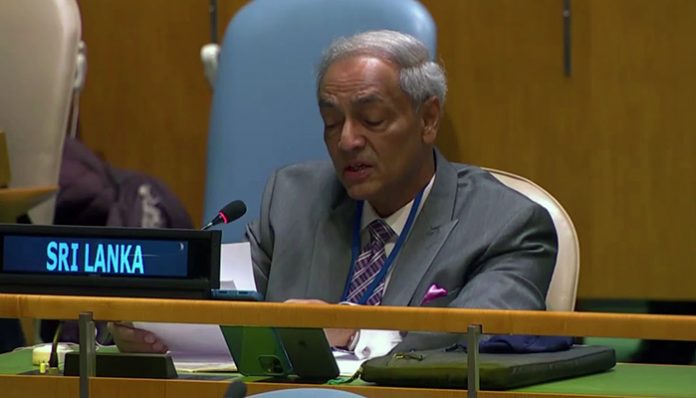 A global appeal has been launched to stop Sri Lanka’s chief justice during Mahinda Rajapaksa’s presidency in getting elected to a top UN body entrusted with writing international law.

The UN has announced that its General Assembly will elect in November 2021, 34 members to the International Law Commission for a five-year term beginning on 1 January 2023. Eight Asia-Pacific nationals will be elected from ten to sit among its 34 members.

Sri Lanka has nominated Mohan Peiris as a candidate for the commission. Currently, he is Sri Lanka’s permanent representative to the United Nations in New York.

Slamming the nomination as a “breath-taking attempt to subvert international institutions and the rule of law”, the International Truth and Justice Project (ITJP) and Journalists for Democracy has urged UN member states not to vote for Sri Lanka’s candidate “who is compromised by his failure to hold accountable the perpetrators of enforced disappearance, execution, torture and rape during his tenure as the country’s chief law officer”.

“The UN’s International Law Commission codifies international laws, with some of its recent work being on areas like immunity, extradition and crimes against humanity. All lawyers and those who care about a more just world order must urge members of the UN General Assembly not to vote for this man,” said the ITJP’s Executive Director, Yasmin Sooka.

“Under Peiris’s watch, serious international crimes were alleged to have been perpetrated by the Sri Lankan security forces for which nobody has been held accountable. His appointment as Sri Lanka’s top diplomat at the UN in New York already sent an appalling signal to the international community regarding Sri Lanka’s disregard for accountability and was a slap in the face for thousands of victims who have still not accessed justice,” she added.

“This is a man who presided over a period in which journalists in Sri Lanka were abducted and disappeared, assassinated, brutally tortured and locked up just for doing their jobs. Media rights groups around the world must stand in solidarity with us against his nomination for a job that would help whitewash his record and that of his Government,” said Rohitha Bashana Abeywardane of Journalists for Democracy in Sri Lanka.

“Those were journalists who exposed credible evidence warranting international legal intervention for gross human rights violations committed by the Sri Lankan State. Appointing a man who denied them justice to a global body that decides on international law is like handing over a hen coop to a jackal.”

Read full statement by ITJP and JDS, revealing why members of the UN General Assembly should vote against Mohan Peiris.