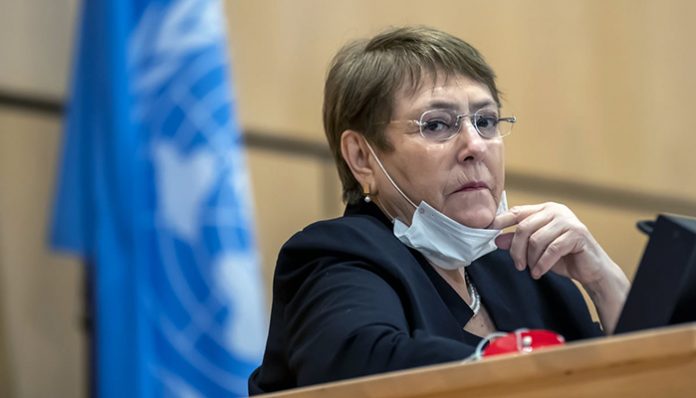 Sri Lanka has come under the international spotlight once again for its existing and newly introduced terror laws apparently targeting minorities in the country.

In her human rights update to the 47th session of the Human Rights Council, the UN rights chief slammed the banning of hundreds of organisations as harmful to reconciliation.

The plight of several individuals arrested under terror laws were also brought to the attention on the world rights body.

“In Sri Lanka, I am concerned by further Government measures perceived as targeting Muslims, and by the harassment of Tamils, including in the context of commemoration events for those who died at the end of the war,” said High Commissioner Michelle Bachelet.

“I am concerned that recent appointments to the Office of Missing Persons and Office for Reparations, and steps to discourage investigations into past crimes, are further undermining victims’ trust. Recent counter-terrorism regulations – which include the listing and/or prohibition of more than 300 Tamil and Muslim groups and individuals for alleged support of terrorism – will also not advance reconciliation.”

Less than two weeks ago The European Parliament’s adopted a resolution to suspend the Generalised Scheme of Preferences known as GSP+ to Sri Lanka unless the country “repeals or replaces” the Prevention of Terrorism Act (PTA).

Newly adopted laws that enable detention without a court order and deaths in custody were also brought to the attention of the Council.

“Regulations now permit the arbitrary administrative detention of people for up to two years, without trial for the purposes of de-radicalisation. I also note a continuing series of deaths in police custody and in the context of police encounters with alleged criminal gangs. A thorough, prompt and independent investigation should be conducted.”

Following on the footsteps of the UN rights chief, five countries expressed their concern about the Sri Lankan Government’s attempt to dismiss a number of emblematic cases and to initiate criminal proceedings against individuals pursuing some of these cases.

In March, these countries known as the core group on Sri Lanka led moves to adopt a resolution at the UNHRC that mandates the high commissioner’s office to collect evidence of war crimes and crimes against humanity with a view to future prosecutions.

“We call for former CID director Shani Abeysekera’s safety to be ensured,” said Canada, Germany, North Macedonia, Malawi, Montenegro and the UK in their statement to the UNHRC.

“We are deeply concerned about the ongoing use of the Prevention of Terrorism Act and the recent intention to introduce a rehabilitation process lacking adequate judicial oversight. Human rights lawyer Hejaaz Hizbullah, and poet and teacher Ahnaf Jazeem, remain detained without trial and further arrests under this Act have continued, including among minority communities and the political opposition.”

The government has rejected that the country’s anti-terror law has been systematically used for arbitrary arrests and the detention of Muslim or other minority groups in Sri Lanka.

“The Government is in the process of revisiting provisions of the Prevention of Terrorism Act, in keeping with its commitments,” said the foreign ministry in a meeting with EU envoys in Colombo soon after the European Parliament threatened to remove the GSP+ facility.

Sirasa journalist intimidated in the east

Complain to the Police about those using the Rajapaksa name for...