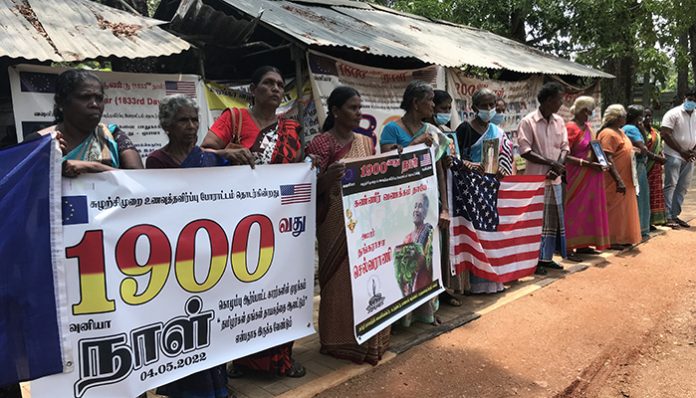 Protestors in the Vanni – Sri Lanka’s longest-running protest – have suggested to protestors in the south, that they can work together to end the country’s economic crisis, through recognizing Tamil sovereignty by the Sinhalese people.

On the eve of the 1900th day of their continuous protest commenced in Vavuniya in the first quarter of 2017, urging the government and international community to reveal the fate of loved ones who were forcibly disappeared during the last days of the war and while in detention of the security forces, Tamil mothers have emphasized that the continued conflict between the Sinhalese and the Tamil people will only lead to destruction on both sides.

“For Sinhalese and Tamils to live together in harmony, the Sinhalese must speak up to protect the sovereignty of Tamil people.”
They point out that, there always will be a risk of a conflict emerging between the North and the South, until the rights of the Tamil people are recognized by the Sinhala majority.

Protesters have also paid floral tributes to Mother Thangaraja Selvarani, who passed away few days ago, while on continuous struggle to find three members her family, who were disappeared fourteen years ago, provincial correspondents said.

Thangarasa Selvarani, aged 75, a resident of Christavakulam, Vavuniya, who was suffering from an illness, passed away on the International Labour Day.

According to provincial correspondents, nearly 115 parents who had taken part in the ongoing struggle in North, seeking justice internationally to find their loved ones who have been forcibly disappeared, have now passed away without knowing the fate of their children. 15 of them were from Vavuniya.